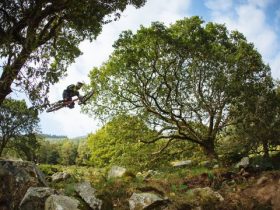 Two weekends of epic riding on the bounce. How lucky am I? 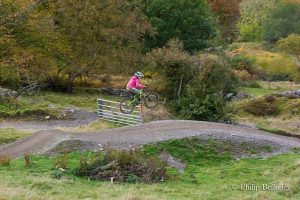 Having booked onto Revolution a month in advance, you can probably guess I was quite excited in the week upcoming to the 25th October. It was going to be a day of riding bikes with a group of awesome and super outgoing female shredders. Not only this, my trusted Voltage went on a diet! How can you put a bike on a diet? Lighter wheels, that’s how. I’m not exactly sure how much weight my bike lost, but on the tracks was where I noticed the difference.

Over the past few weeks my bike has taken a few trips with me to ‘The Cage’ that is the workshop at Tweeks Cycles. And this is where the magic happened. Slowly releasing more and more potential out of the bike I rolled out of there 2 years ago. 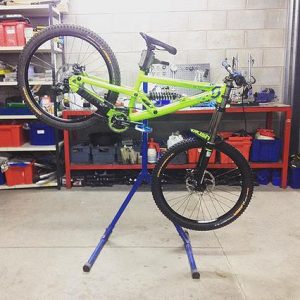 So, excited? Check! Bike ready to roll? Check! Mega riding friends? Check! And who can forget getting greeted by the chocolate mafia before your first run? Having a crazy chocolate Labrador myself, not giving Revolution’s seriously cute dogs a fuss before I go for a run is just not possible!

Finally on the uplift I’m super eager to get riding, when normally I’m feeling slightly sick with nerves on how the day will go. That’s how the last two weekends of riding have gone. Instead of feeling nerves, I’ve enjoyed myself a hell of a lot more. The laid back riding that went down last weekend definitely continued through to riding in the valley of Llangynog.

First run down with Ellen and Amy we were heading down the Freeride. I was planning on taking it easy, but that did not happen! Thanks to freshly sculpted take offs, clearing the tables tops was unexpected. It felt good, what airtime doesn’t? But at the bottom part of me was saying…ooops, maybe a bit too eager for my first run! After another run we caught up with Nin and changed from the Freeride to the Ghetto. My favourite track at Revolution by far! And I have so missed riding it in the wet! Getting down was pot luck rather than skill if I’m honest! So you can probably guess the fun continued and even more so on the Main Line too. 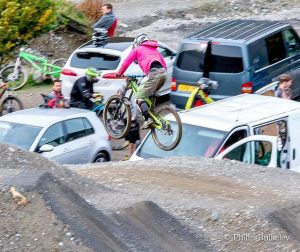 Then we get to ‘that’ corner on the Main Line and if you’ve been there you know what I’m talking about. The rocky and greasy right hander, one that I had only ever ridden in dry conditions previously. So I was a little bit hesitant to say the least! First two ‘attempts’ unsuccessful, and getting close to lunch I question going back up for a third attempt. I was ready for lunch with my stomach wanting food but when Nin said ‘oo I might go up for another run.’ Back I was on the uplift trailer, ‘One more attempt, I’ve totally got this!’ With the plan of doing a full run on the Main Line, I was getting down this corner. Feet on the pedals this time and preferably not face planting it! With a quick ‘woop!’ after finally conquering the corner we made our way to the bottom, loving the tracks a little bit more on every turn. But then it was definitely time for food! Downhill is hard work! I was so naive getting into Downhill thinking it wouldn’t be that demanding physically!

After food and stopping Rusty from stealing my sandwiches, it was time to get back on the bike. I was looking forward to an afternoon packed full of riding, but doing run and run after run in the morning and eventually losing count of how many I actually did, a few silly crashes started to happen! Purely from struggling to hold onto the bars. Ellen and Nin went on to try the Ffar Side, a track I had a lot of fun on earlier in the year. With my tiring arms I stuck to the Freeride and Main Line.

I put my GoPro on my helmet, but was unsuccessful in getting a clean run with it! I knew I should have put in on for that first run of the day! As I say often, if you’re not crashing you’re not trying hard enough right? Well I’ll keep saying that to myself anyway! It had nothing to do with my tiring arms….!

It was 3 o’clock when I decided to call it a day and I had been sending it and slaying corners for most of it. (I was riding like a pro in my head, doubt it looked anything like it felt like I was riding) Thanks to Revolution Bike Park for the amazing uplift and having such epic tracks they’re constantly improving. I just need to man up and deal with the arm pump so I can ride for longer!

Thanks to the guys at Tweeks for getting my bike dialled for what was an unforgettable day on the bike. Majority of the changes to my bike came from parts bought off Jake, so thanks for finding them! Thanks to the group of girls I was riding with too. You all made it the day it was! And to my Dad for the photos! I also need to say a massive thank you to my coach, Gareth, for his help with my fitness over the past month. I’m looking forward to working with him for the following year and see if my riding can progress further!

Excitement is building across North Wales, as thousands of geocachers ...