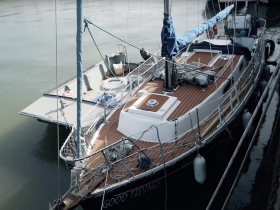 From Novice to International Sailors! Episode 5 – The Ups and Downs of small boat life

Fans and competitors alike will once again descend on North Wales for the 2015 Wales Rally GB this November.

The award winning event that just keeps getting better and better will see it’s third year of hosting the concluding round of FIA World Rally Championships.

This isn’t just a motorsport spectacle taking in some of the world’s finest rally stages, this brings to Wales a huge economic boost and helps bolster the 17,000 people employed in Welsh automotive manufacturing with an annual turnover of £3 billion.

What can you expect from this years event?

Alan Gow, Chairman of the Motor Sports Association gives us an insight.

“This will be the third year that the concluding round of the FIA World Rally Championship has had its headquarters in Deeside and November’s finale will continue to build on the many notable successes of the past 24 months.

While we are delighted that these achievements have been recognised recently with the award of the coveted Best Event (Large) accolade at the National Tourism Awards for Wales 2015, we are far from resting on our laurels. As a result, we are confident this year’s Wales Rally GB will be the best yet.

For starters the competitive route for 2015 sees the re-introduction of the famous Myherin and iconic Great Orme stages last seen in 2013. The former is always is great favourite with competitors while the latter provides one of the most stunning backdrops on the globe-trotting WRC calendar.

As tradition dictates the majority of the thrilling timed sections are set on some of the world’s finest gravel tracks in the awe-inspiring Welsh forests. Adding to the challenge and spectacle, two of these epic stages will be held after sunset on Saturday.

Thanks to our enthusiastic partners in Conwy County Borough Council the event commences on Thursday evening with a sparkling Ceremonial Start on what’s sure to be a crowded Mostyn Street in Llandudno.

The dramatic high-speed action then blasts off early Friday morning on familiar Wales Rally GB territory in mid-Wales. There are double runs through the well-known Hafren, Sweet Lamb and Myherin stages, either side of a lunchtime regroup on the busy streets of central Newtown.

Saturday offers an even longer and more challenging day starting with back-to-back runs through the classic Gartheiniog and Dyfi forests to the north of Machynlleth. The route returns to Deeside via the fast and tricky Dyfnant and Aberhirnant stages and the well-established, family-friendly RallyFest at Chirk Castle. After a short service, the intrepid crews then set out for a second run through both Dyfnant and Aberhirnant, this time under cover of darkness.
Sunday is a shorter – but no less spectacular – day set entirely in north Wales. The Brenig and Alwen stages introduced last year both feature again, with the second run through Brenig being Wales Rally GB’s concluding ‘Power Stage’. In-between comes the wonderful test around the Great Orme.

This year’s Ceremonial Finish and prize-giving have been relocated to the Service Park at Deeside, ensuring that celebrations can take place among the teams and fans to create a memorable finale to the 2015 WRC season.

It all adds up to 19 Special Stages and 312 kms (191 miles) of fiercely fought competition for what we are certain will be a brilliant conclusion to this year’s FIA World Rally Championship. The popularity of the National Rally is another important factor in the recent success story and, ensuring crews from all levels of the sport within the UK can be part of a World Championship rally, the route for the WRGB National Rally shadows the international event and, by popular demand, the teams are also based in Deeside.

It’s been written that ‘this year’s route is a celebration of everything that’s good and great about the present and past of Britain’s round of the WRC’. Praise indeed but we are confident the 2015 Wales Rally GB will build on all the recent massive accomplishments and fully live up to everyone’s ever-escalating expectations. “