Back in early 2014 Chris Mayers and I (Kevin Merrey) started hatching ideas and plans for mini adventures that we could realistically achieve considering we both have young families and busy lives.  Neither of us are unaccustomed to adventure and outdoor pursuits.  Chris has been to Everest Base Camp and climbed Kilimanjaro,  as well as completing the 3 Peaks Challenge and many other trips in Scotland, Wales and the Lake District.

I have been on various wild swimming trips, cycling trips etc. but am newer to climbing mountains and trekking.  Although I have back packed in Australia, Thailand and New Zealand, which featured many adventures in itself including hitch hiking across both the North and South Islands of New Zealand and a 3 month road trip around Australia. I also learned to surf in Oz, living in Sydney and spending months surfing up and down many of the East coast surf beaches.

We are also keen runners and cyclists, both competing in regular long distance running races, and raising money for various charities.  Chris recently competed in the Cumbrian Challenge for the Walking with the Wounded charity and is due to compete in the Royal Parks Foundation half marathon in October, plus we have both ran 5 and 10k races this year.

So drawing on our passion for travel, adventure and fitness, we decided to organise regular micro adventures.  Starting with this one…

Our aim was to combine a kayaking trip with hiking and a mountain thrown in for good measure.  This called for a meeting of map reading, beer drinking and planning!  We eventually settled on seeing how far we could Kayak, hike and climb in 24 hours from sea to summit and back to the starting place.  We settled on Barmouth, North Wales as our starting point. With the mighty River Mawddach as our kayaking route and Cadair Idris as our mountain to climb.

We drove from Essex on a busy Friday afternoon, with a planned camp in Barmouth that evening, close to our Kayak launching point.  The traffic was heavy and the road trip took longer than expected, and we didn’t arrive until 10pm.  Pitching our tent by car headlight, a few beers then head down for an early start the next morning.

We awoke slightly tired and aching, to a misty, moody Welsh morning.  Tent packed quickly it was time for the short drive to the slipway at the river estuary.  We had been kindly leant a blow up Kayak, but had not tested it with the both of us in it, plus all our kit.  We only just managed to cram ourselves and our stuff in, like sardines in a tin!!  The point of launch was funny but slightly un-nerving, as the river is fast flowing and full or sand bars and swirling currents, and is big and wild, snaking majestically through the mountains of Southern Snowdonia.  But we were off and underway with no dramas.  The current soon whizzing us along away from the shoreline and into the main tide flow.

Our aim was to paddle 6.5km up river to the Southern riverbank, where a small tributary enters the river from Cadair Idris itself.   Then hide the Kayak and hike the rest of the way up to the summit, then wild camp on the top that night.

It took us roughly 2 and a half hours to paddle to the tributary.  Along the way we were in awe of the stunning scenery.  We did not see another boat the whole way.  It felt like we had the river, surrounding hills and mountains to ourselves.

The river trip did at one point get a little hairy.  We went aground on a sand bar that was just under the water, and the Kayak turned sideways onto the in coming tide.  We were stuck for several minutes.  We knew if we got out to shove the kayak off, even though it was shallow on the sand bar, that would have been dangerous as we could have got stuck in the sand ourselves.  But eventually we got moving and were away again.  30 minutes later we pulled out of the main river into the calmness of the small tributary.  Time for a breather, to deflate and hide the kayak , get the back packs on, and head up the valley towards the foot hills of Cadair Idris.

Over the next hour or so we hiked through stunning lowland forests, along streams and small waterfalls, then out into farmland and round wild and lonely lakes.  Eventually reaching the start of the mountain trail.  We chose to take the Foxes Path, which entails a grade 4 scramble to get to the summit.  After Kayaking all morning, then a 3 hour hike to get to this point, it was a fair challenge.  However, the views as we made our way up the very steep scree slope just got better and better, with the low cloud showing signs of clearing with every minute that passed.

Eventually we made it to the top, with a short walk to the summit.  Low and behold, as we made it to the pinnacle of the climb, the clouds dispersed leaving us with an amazing 360 view of the truly beautiful Welsh scenery.  We celebrated by having  a good few slugs of Whisky from our hip flasks and a well earned sit down.  We chatted to a few climbers that joined us on the summit, and exchanged some nice stories.  However, as the late summer evening sun quickly started sinking towards the Irish Sea, everybody but us headed back down.

This left us to find a grassy (ish) spot on the summit to pitch our tent.  We had some dinner, more Whisky and turned in for the night.  Things quickly becoming pitch black as clouds rolled in around us.  But what an amazing place to camp.  It was perfectly still and quiet, with a strong sense of solitude. We both slept like babies.  12 hours solid, without even getting up for what is usually a hassle of a night time wee!

In the morning, with the misty clouds still hanging on the mountain top, we packed our kit and headed down the Pony Path, which is a more gentle hike, but none the less still an amazing walk.  Eventually we made it back down into the valley and forests, to pick up the tributary again that would lead us back down to the place where we had hidden our Kayak.  Not before we had a quick swim and wash in the river, which was in a wonderfully tranquil part of the river, with the morning sun now beaming through the trees.  We also had breakfast by the river.  All just perfect.

We made it back to our Kayak, inflated it, and headed back out into the main river.  We had worked our trip out to coincide with the incoming tide on the trip in, and the ebbing tide on our way out.   We found, that as for most rivers, the ebb tide runs out a fair bit stronger than the incoming tide.  As we paddled down, this time cutting across to the North shore we soon realised that we were going to have to stick to the main deep channel in the middle of the river,  as anywhere on the edge of the channel, the water rushed over the sand bars quickly and with a fair amount of turbulence.  It became a bit of a race against the tide to make it back to the slip way, as all around us we could make out the ever emerging sand bars as the water dropped.  We arrived back at the slipway to find only inches of water around us  Any later and we would have had to have walked ashore in the dangerous sand flats.  But we got back, safe and sound.  An exciting end to a truly epic trip.

This was the start of things for us as an adventure team.  This year we have been up to the Isle of Skye for 4 days of trekking through the Black Cuillins, been wild swimming and are now planning a whole series of adventures, including the Welsh 3000’s in the winter, and with a real twist.  More will be revealed on my Twitter account.  @kmerrey 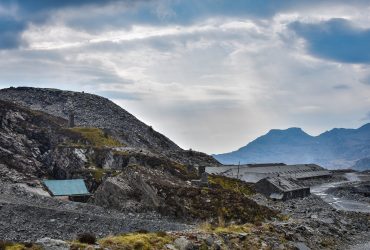