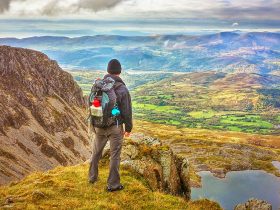 “Legend” is not a status we hand out lightly, however when you hear about Eric Jones’ achievements, you may suggest it’s not a high enough status for this incredible adventurer from North Wales.

Born in 1935 and raised on a farm near Ruthin, Eric was bitten by the Adventure bug from an early age. He dreamed of joining the Parachute regiment but as a result of an injury he ended up joining the military police and it was in 1961 that he finally took up skydiving, a year later he began climbing. He was 26 years of age.

His climbs began in Snowdonia and the lake district and then further afield in Italy but it was when his climbing partners where not available that he took on solo climbing and little did he know back then, quite what he would achieve in this lifetime.

Solo climbing was a lot riskier of course but with his skill and self confidence he was able to move at a faster pace. He was able to take routes and climbs that he felt he was capable of without worrying if a partner could tackle the same terrains.

In 1969, Eric Jones ascended the Bonatti Pillar on the Dru solo, and in 1971, he was the first person to climb the Central Pillar of Brouillard on the infamous south ridge of Mont Blanc. Not content to stop there he became most famous for his his climbs on the Matterhorn and South Col on Everest. In 1981 he became the first Brit to solo ascend the north face of the Eiger. Not content with completing “firsts” for his ascents, in 1986 and into his 50’s he became the first person to BASE jump from the Eiger.

Some of his climbs have been the subject of award winning documentaries. “Eiger Solo”, “The man who fell to earth” and “Ice Climbing with Eric Jones in Switzerland” just a few of his amazing moments caught on film.

As a skydiver Jones jumped onto the North Pole and down the east face of Cerro Torre in Patagonia. In 1991, as a member of a four-man team, he flew two hot air balloons over Mt Everest, an exploit which gained three entries in the Guinness Book of Records.

Having jumped from balloons as a skydiver, Eric started BASE jumping (jumping from a fixed object – natural or man-made) at the age of 50 having met renowned jumper Moe Villetto. Combining jumping with his other interests, his first BASE jump was off the Eiger, the first person to do this. He made a number of spectacular jumps from buildings and bridges in the United States, but is famously renowned for his jump off the Angel Falls in Venezuela, shown in the documentary film “The Man Who Jumped To Earth” (UK, 1998) directed by Steve Robinson. At the age of 61, he is the oldest person to have done this.His jump into the Cave of Swallows in Mexico, directed by Llion Iwan, was shown in the documentary “The Man Who Jumped Beneath The Earth” (2003).

His self-proclaimed motto is “Life is adventure or nothing at all”.

An unassuming man, he still walks, climbs, skis and jumps.

He is married to Ann, and has two children. Featured in the Lifestyle section of The Independent in January 2008, he said :

After we had kids, people would ask if I wasn’t being irresponsible for doing all these things but my take is that everything in life involves risk and it’s about weighing up those risks. When people go into climbing, they can start out with a macho attitude but you learn to be humble and realise you’re there on nature’s sufferance. You don’t conquer a mountain and if you go out there with that attitude, it will bite you back.

Today he also owns and runs a small cafe, “Eric Jones’ Cafe” at Tremadog, near Porthmadog, which is popular with climbers and bikers alike. Some of his exploits can be seen in photos on the walls.

Jones is regarded by many of his peers as Britain’s most successful solo climber and to us at www.extremenorthwales.co.uk he is rightly labelled as “Legend”.