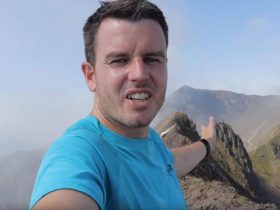 Whilst we wait patiently in the wings for the scene to be set for this year’s winter epics in Snowdonia, I’m taking a look back at my snowboarding highlight from last season’s adventures in the mountains of North Wales – an awesome day of boarding under blue skies and sunshine on Y Braich, in the Carneddau range.

Okay, so we don’t have pine-lined pistes, quad chairlifts and stylish cafés every half mile on pristinely prepared red runs. But what we gain through the sheer adventure of cold early starts, long exploratory treks to find the best possible snow and making the most of every opportunity, easily matches up with any day on a ski package in mainland Europe…and I know which remains the most vivid in my memory.

One of the most exciting elements to backcountry boarding in Snowdonia is not knowing at the beginning of the day where you might end up. It pays to know where the best snow lies and where it is most likely to survive the longest through our unreliable, fickle and often temperamental winters. Driving westward along the A55, the first promising glimpse of snow-capped summits is usually awarded coming out of Colwyn Bay and looking up above the Conwy valley. So often this view towards the Carneddau is enough to get the heart racing and produces a little squeeze on the accelerator. But the quest to find the right slope is not a simple one…

Will it be the Conwy valley and an epic slog up the long and unrelenting flanks of Drum or Foel Fras to the majestic summit of Carnedd Llewelyn? Or to continue on to enter the gateway into the aggressive, glacier carved realms of the Ogwen Valley, welcomed by the foreboding forms of legends; Glyder Fach, Glyder Fawr and the mighty Tryfan? Do we have the time to travel further and chance a reccy of Snowdon, probably sitting in her own weather system, but without doubt holding some of the season’s best snow?

On the morning of the 5th of February we were tight on time. The biggest challenge is finding the best snow which can be reached from the valleys in the least amount of time, leaving as much time as possible for boarding. With all the gear slung in the boot of the Subaru Forester, an Aussie mate in the passenger seat and Costa coffees in hand, our first view of the Carneddau was good. It was already 9.15 so getting to 3000ft in any range was unlikely with the little time we had. Ogwen Valley it is then; with mountains lining the A5 on both sides and various access tracks taking your vehicle as far as you dare go at the risk of getting stuck.

Rounding the Western head of Llyn Ogwen I looked eastward to see exactly what I was hoping for. On the near horizon I studied the 2km constant slope of Y Braich (The Arm) dropping in a broad exposed ridge from the 833m summit of Pen Yr Helgu Ddu (Head of The Black Hunting Dog) down to the marshes below at 500m, beautifully coated in snow from summit to valley.

One more thing makes this the most perfect mountain for a day’s boarding; the water board access road which leads straight along the base of the western flank of the mountain, leading up to the Ffynnon Llugwy reservoir. If your vehicle can make it up the snow-laden asphalt, you can save your legs the 1km march to the start of the climb. Time to put the Forester to good use. Snow flying from beneath all four wheels, we graciously (smugly) sailed past walkers who had chosen the more honorable approach on foot.

The softly overcast morning sky was clearing as we dragged our boards from the boot and slung them awkwardly over our shoulders and rucksacks. Jordan (or ‘Jordo’ in his native tongue) more used to hooking a surfboard under his arm and wading into the Pacific Ocean, was speechless. Despite having lived in North Wales for a few years, he was only just learning that our mountains have got so much adventure to offer and it’s simply there for the taking. You’ve just got to grab every opportunity as it comes.

Soft, ankle deep snow, an inviting crunch with every step set the soundtrack to the first 15 minutes while our lungs got used to the immediate demands of the task and our legs fought to stay upright as they disappeared frequently into unseen hollows. We picked a line up the lower end of the western flank in order to reach the ridge as low down as possible. As we gained height our excitement grew, finding the quality of the snow improving continually and seeing deep channels of virgin snow that we would carve through on the way back down.

Reaching the broad crest of the ridge we turned northwards and immediately felt the sharp edge of a Northerly headwind, whipping up spiraling twisters of snow and ice, tearing past us and then through us. Gloves. Hoods. Heads down.

The hour-long climb passed quickly. Mesmerized by the view on all sides, it was easy to forget the cold. As we neared the summit we accepted that the wind-scoured surface, textured with tufts of frozen grass, wasn’t world class but we didn’t care, this was already amazing. Buzzed by military helis training in the valleys around us, we reached the summit, amazed to find even better conditions and breathtaking scenery as far as the eye could see.

Time to strap in. Cold fingers burned, tying into board boots and strapping into bindings, but the sun was now in our faces as we set off down the pristine crystallized summit slope. This is what we came for. Freedom, speed, exhilaration.

Flying past each other, we could just make out the massive grin on each of our faces. Dropping through steep channels of deeper snow, ploughing through turns, soft snow spraying outwards in an arc, we couldn’t have asked for more. We had planned to stop half way down to find a section of snow on which to build a decent kicker. We knew when we had found it.

After half an hour of shoveling and shaping we were more than pleased with the result. I took my time with a couple of safe runs; Jordan just went for it. Jordan made up for his lack of finesse on the ramp by just hitting it fast and aiming for distance with impressive results. The landing zone was forgiving, with enough snow to cushion the inevitable bailouts from both of us, until we got the measure of the kicker. One hour later we were totally satisfied.

With enough energy left for the last half of the descent, we set off. The terrain got better as we got lower, carving round rises and speeding through deep channels filled with dips and hollows; an awesome climax to the trip, adding another level to the challenge, especially with our legs reaching their limits.

We squeezed every last meter out of the snow until I gave up dodging solid tufts of frozen turf on the marsh and Jordan called it a day when he dropped through the snow into a ditch. Boards under arm, we slipped across the now melting snow, eating icicles snapped from the bank of a narrow stream.

Days like these are remembered for a long time but they needn’t be rare. Snowdonia is loaded with opportunity for endless adventure. Whether you find it or not is all about attitude, not opportunity. You just have to make it happen.