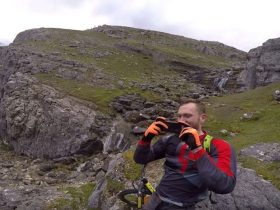 On Sunday 29th November, mountain bikers from around the UK headed to Coed Y Brenin for Round 4 of the Welsh Gravity Enduro.

Rob Williams took first place in the Elite Men class. He finished second in each stage of the round, with a total time of 15:40.641. Rob beat Leon Rosser by 3.572s, with Joe Taylor a further 8.588s behind in third.

Extreme North Wales caught up with Mathew ‘Pidge’ Pidgeon, who competed in the Masters class.

“After a break of 5 years or so, this was my first Enduro at Coed y Brenin. I’ve always loved bikes and in the last few years have enjoyed racing downhill in the ‘Gravity Project’ races, based in the South of England. I’ve been itching to give Enduros another go, so earlier this year bought myself a Giant Reign 1.

I searched online for races and the ‘Welsh Gravity Enduro -Round Four’ at Coed Y Brenin jumped right out. I love North Wales, having visited twice a year over the last three years or so to do some walking in Snowdonia. To race what I understood to be the first and one of the very best trail centres in the country was too much of a temptation, so I booked it immediately.

It didn’t take long to persuade one of my friends to join me, so Jesse Staple (Queen Elizabeth Country Park Collective) and I made the road trip to Snowdonia. The drive was stunning and the scenery got better and better as we got closer. On arrival we parked up, signed on and kitted up; preparing for what we expected to be another day of terrible weather.

The format for the day was one practice loop in the morning, followed by a race loop in the afternoon. There were three timed stages ranging in length. The uphills were on fire road apart from one single-track centre out of the start. The race started and ended at the Visitor’s Centre where the sign-on took place. The route was very well sign posted so we made no navigational errors all day!

The timed stages were almost exclusively on single-track trails, which can be ridden when there is not a race on – i.e. no fresh cut trails especially for the race. The benefit of this was that the trails ran very well, even though there had been a lot of rain prior to the race. There were some puddles, but no gloopy mud to slow us down. This was very impressive, as the trail builders had obviously thought a lot about drainage!

During the practice, Jesse and I rode some sections of the stages slowly looking for sneaky lines. We rode other parts pretty much flat out, to get a feel for grip and to see how the trails flowed at high speed. Once we got back to the car park we had a quick snack, filled up our water supplies and most importantly changed into fresh gear!

The stages were amazing, some of the best trails I’ve ridden in a long time and very different to the more technical downhill tracks I’ve been riding in the last few years. Where these trails differed was their length and variety. The race had a great mix of trails through the woods, as well as sections out in the open. It mixed up smooth flowing fast trails, with steep rocky descents, a few rock drops and some table top jumps/rollers mixed in.

Stage one took me 6:13. I made one big mistake almost straight out of the gate, where I came off the main line of the track and came to a complete stop. Immediately I knew I had time to make up – no pressure! Approximately half way through the stage I also caught someone up, slowing me down a little before I was able to pass on a fire road climb.

Stage 2 was my best performance at 8:01. It was a long stage and therefore difficult to know when to pedal and when to rest. It flowed amazingly well and although I overtook two riders, they both pulled off the trail with perfect timing, so I had a nice clean run. At times it felt like I had hit warp speed. I was glad to be wearing goggles and felt I did myself justice considering that I doubt I could have ridden it any quicker. The pine needle covered trails in the middle of the stage were a highlight, as were the rocky berms on the steepest section of track that we hit all day.

Stage 3 flowed much better than I remembered from the practice loop and all was going brilliantly until one of the last sections near the bottom. I took what I thought was a hero line over some big nasty wet roots, only for both wheels to suddenly slip from under me landing me unceremoniously onto my backside. Fortunately I managed to get up quite quickly and pedalled hard, knowing that the end was near. And then it was all over!

Jesse finished 14th and I managed 16th out of 50 riders in the Masters class. Our times were 17:31 and 17:53 respectively. Then ensued a long conversation of ‘what if?’ and ‘if only I’d…’ which all mountain bike racers will be able to relate to.

A total of 186 riders were rewarded for coming out to race on Sunday. Barely a drop of rain fell while we were out riding. This was amazing considering that on Saturday we were drenched to the bone once we got back to the Visitor’s Centre.

Strava tells me that we rode a total of 35.9km with 979m of climbing. It was amazing fun and I’ll be going back as soon as possible, whether it’s to race or just for fun.”