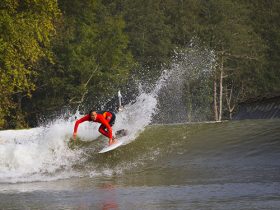 A British climber has revealed how he had to prise open the jaws of a grizzly bear with his bare hands after the animal launched a horrendous attack while climbing in the Canadian Rockies.

Greg Boswell, 24, from Fife, and friend Nick Bullock, from Llanberis, Gwynedd, North Wales, were scaling an ascent called Dirty Love on the 3,261ft Mount Wilson when the bear attacked.

The animal clamped its jaw around Mr Boswell’s leg before biting down on his shin and lifting him into the air.

Mr Boswell said: “it was just as terrifying for him as for me. I owe my life to Nick.”

Mr Bullock said he ran – armed with a ski pole – to help his friend, who then escaped the bear’s clutches and fled from the animal ‘screaming and shouting’.

Mr Bullock added: ‘I stopped and turned, but I’ll tell the truth, the thought of running back to face the bear armed with only a ski pole slowed me.

‘In fact, armed with a bazooka would have still slowed me, but Greg was shouting my name, how could I just stand.

‘I took steps forward and out of the dark a shape ran at me. I screamed, the skin at the back of my throat tore. But the shape was Greg, screaming and running and shouting.’

The climbers both managed to hide in the surrounding forest, where they waited to ‘ambush’ the bear if it returned.

Shining a light into the darkness and terrified the bear might return, they tried to get back to their abseils while constantly keeping a look-out.

But instead of retracing their own trail they accidentally followed the path left by the bear and became lost.

After spending around three hours in freezing temperatures, the pair eventually found the route down the mountain and made it to the town of Banff, Alberta, where they were treated at a hospital.

Mr Boswell required surgery on the five deep leg wounds he sustained in the attack and later posted a status update on Facebook.

‘Crazy news from Canada!’ he wrote. ‘I’m going to put it bluntly, but would just like to let everyone know I’m ok, just a little shook up and sore!

‘I got attacked by a Grizzly bear last night and lived to tell the tail (sic), and to make the 3 hour descent and 2 hour drive to the hospital. All stitched up now and on the mend.’

Thanking his friend for ‘saving his life’, he added: ‘It was just as terrifying for him as it was for me. I literally owe my life to Nick. I was in shock after the incident and didn’t know what to do. Nick got me out of there and drove me to the hospital.

‘It wasn’t a one-man mission to stay alive, it was a friend doing as much as he could in a crazy situation to keep his friend from dying.

‘I probably would have died of hypothermia or blood loss if he hadn’t kept me going. My stupid idea was to climb a tree and wait until daylight.

‘I can’t thank Nick enough, even though I know I don’t have to. Cheers bro.’
Mr Boswell’s father Peter, a 55-year-old photographer, said his son had suffered five puncture wounds and needed more than 40 stitches.

He believes the head torches the climbers were wearing may have saved them.

He said: ‘The worst part was after the bear let go of his leg it was stood over him. Greg was fortunate it was night time, the head torches they have on are really powerful.

‘He looked up into the bear’s face. The head torch may have startled it.’