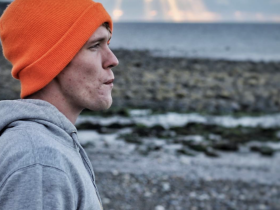 We quite often take a few body boards with us when we go on our kayak days for www.extremenorthwales.com
It’s great fun catching the waves and feeling the power of the ocean take you at its will towards the shore, often accompanied by loud whooping noises from among us.

Usually we invest in around 4 or 5 of the £30 polystyrene body boards that are readily available and throughout the summer I’d say at least 2 each year get decimated to a point where they are unusable.So imagine our joy when our great friends over at Fatyak Kayaks said they were not only going to start making boards but where sending one over for us to test out.

I must admit we have had the board here with us since the winter because not only is this board superb in the sea, it doubles up as a board for use on snow.

Those of you who do not know who Fatyak are, they have a purpose built factory based in Somerset and are run by a pretty amazing team of people. What makes them amazing? Well it obviously seems to be more than just a job for these guys, it’s more about a passion.
They don’t just make these products right there in their premises in the UK they are active users of their products too.

They could easily just designed and produced a board that you could jump on in the sea and ride a few waves, but that wasn’t quite good enough for these guys.
They designed a board that would last, could take a bit of a hammering, could be used by all ages and when the surf is out of the question in those winter months it can be a hit on the snow too.

Yes they built the Hönö and we’re extremely glad they did.

We were gutted not to get any decent snowfall this year, the first year in recent memory when we haven’t had a few snow days to throw ourselves into it, and so we had to wait for the fairer weather to arrive to get out in the water.

When the board arrived we identified it as a Fatyak product immediately.
Not just through the bright colours with the large Fatyak branding but through the obvious high quality of the product build.

It’s light enough for a child to handle, has 4 grab handles that don’t feel like they’re going to rip off when you catch a wave and it’s ridged bottom screams out “Get me on the slopes!” It’s a fantastic all round board and we were heading to the Welsh coast as quick as our little van could carry us to test it out.

We’d planned a day kayaking in the surf, using amongst others another Fatyak product the Kaafu Adventure S, but have to admit I spent as much of the day on the Hönö as I did in the kayak.

I hadn’t body boarded since last summer, but earlier in the year took on some surf lessons in Australia and now classed myself as a “surfer dude”, whilst some of the others on the beach tried to catch waves with their cheaper more fragile boards, I got right into it. Zipping past them laughing and whooping on the crest of a wave. The Hönö was my new toy and I was loving every second.

There were quite high numbers of people along the beach using various body boards but we have to say we were asked by a few people “Where did you get that board? Was it from in the town?” we told them about the Fatyak products and website, but then we had to get back in the water!!!

Time and time again we rode the waves turning it into a competition of who could get the furthest ride out of the board, a competition I surely won by the way!!

Thec is priced at £71 and when you think we have had to replace several of the cheaper £30 boards each year represents great value for money as this thing could last a lifetime and of course it doubles up as board for the snow too.

Great work guys, we’re already planning our next trip out!

You can purchase a board directly from Fatyak here: https://fatyak-kayaks.co.uk/product/hono/