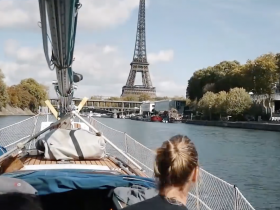 On delivery of our FatYak Adventure S Kaafu we were incredibly impressed with a number of things. The thought of design and quality of build (and accessories) had us looking at each other nodding in agreement and thinking “This is a decent piece of kit”, and we were only still in the car park unwrapping the thing!

Sean, who is our “kayak guy”, a former British Army champion, sat himself atop the kayak and said he was remarkably surprised by the comfort that the “komfort pro” seat gave and the support it offered.

For those of you not familiar with FatYak, they’re a British company based in Somerset where they actually manufacture the kayaks. When you look at the quality of their kit you immediately feel like you are getting good value, because the build quality and design appears very good indeed.

Sean told us we’d need some Leg Straps before he got it on water and put it through it’s paces.We ordered these directly from the FatYak site and again the quality and price were spot on. We’ll perhaps do a review of FatYaks other products and accessories in a follow up to this but for now let’s focus on the Adventure S Kaafu.

The brand new Adventure S Kaafu  Kayak range certainly has the pleasing aesthetics that will make you satisfied with your purchase. It’s a stronger, lighter and more durable, version of their popular Kaafu model therefore making the Adventure S a better choice for serious paddlers.

We took the kayak to Tywyn in West Wales for it’s trial. There were 3 of us giving it a go of various abilities. Sean is a former army champion kayaker, myself and Jac are pretty much beginners especially to sea and surf kayaking.

The Adventure S Kaafu looks sleek and it grabbed a few looks from other kayakers who had sit on style kayaks on the beach. With its ridged base it’s harder to get from the shallows than a smooth based sit in kayak but it’s those very ridges that give it it’s great stability, allowing you to jump aboard when out in about a foot of water. Something that’s difficult to do with a sit in.

It has a couple of sealed storage compartments and an elasticated area at the back where you can easily keep a large drybag.
I checked the covered storage areas at the end of our session and some water had entered but that may well be down to me not ensuring the lids were on properly before we started. One thing for sure though, despite a couple of hours of surfing the waves on the Fatyak the lids never came off once and believe me we had some spills during those couple of hours!

The Adventure S Kaafu is our first sit on Kayak, we have 5 sit ins  between us here at www.extremenorthwales.com but after this all the team want a sit on!!!
The sea in Tywyn was quite calm but there were some good waves breaking. Our Aim was to learn to surf these waves.

We were all amazed how easy it was to get going. We’ve tried sea surfing in the sit in kayaks several times and I spent more time capsized than right way up. Sean though is somewhat a pro at this and makes it look effortless. Now I was on the Fatyak – I was catching as many waves as he was and understanding why he gets a real buzz from it.

I did go over a few times, but being a sit on with leg straps there was no fear of getting stuck in the kayak and I’d just pop up, jump back aboard and get back at it.

Jac is some 20 years younger than I and when he tried it out he put me somewhat to shame.
He was riding waves for 40 or 50 yards and having the time of his life out there.
He himself was inexperienced at sea kayaking but he loved the Adventure S and can’t wait to get it out again to test.

Understandably as beginners, Jac and I were having an absolute hoot but it was noticeable that our former champion kayaker also had a huge smile on his face as he took control of the craft. Our 2 hour session flew by and we came out of the sea planning our next trip out.

I would say this kayak is pretty much perfect for most ages and abilities. Weighing in at around just 16kgs it’s manageable by most, expect spills but expect smiles too. It really is the most fun I’ve had in a kayak and has given me the urge to get out there again as soon as possible.

Anyone interested in buying a great sit on kayak should visit https://fatyak-kayaks.co.uk

And if you particularly want to check out the Adventure S Kaafu you can do so here:
https://fatyak-kayaks.co.uk/product/fatyak-adventure-s-kaafu-kayak/