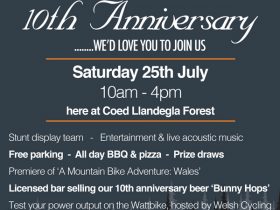 The fat bike, what is it with them large oversized tyres?

Fat bikes are basically an evolution of the mountain bike. The point of having such large tyres helps with traction when the trail become very muddy, when riding on sand and on snow. Riding a bike on the snow is how the fat bike originated in the wilderness of Alaska which saw people modifying rims to get the larger footprint on the snow. By 2005 Surly released the Pugsley which was the first off the shelf fat bike. Since then sales have grown and in the last couple of years the UK has seen more and more of these fat bikes in the shops as more manufacturers make them available here.

So what’s wrong with my ‘normal’ mountain bike?

Absolutely nothing! Whether you ride cross country, downhill or just for fun then you’ll have the bike for you. For me, the fat bike opens up more places I can ride and I have experienced many new sights and sounds on the fat bike. From loading the bike with bikepacking equipment for a night under the stars, riding on the sandy beaches of Wales or heading off into the hills after a blanket of snow, it’s all because of the bike with the big tyres.

Why Fat Bike in North Wales?

As you know North Wales has it all, miles of coastline, rugged mountains and endless tracks in the forests. I have experienced these on the fat bike and intend on experiencing a lot more too. Some highlights for me are riding along a new stretch of coastline and seeing what has been washed up by the incoming tide.

I’ve been riding mountain bikes since about I was 15 and I’m 42 now. I remember riding one of the early MTB’s, the Muddy Fox Courier and being amazed at the new technologies being introduced in cycling. I’ve raced cross country averagely, toured North Wales and the Scottish Highlands and now I feel I’ve found my niche in Fat Biking.

Please View some more of Jeff’s (summittoppler) fantastic videos by viewing his YouTube page at https://www.youtube.com/watch?v=ai_LJmSRpTA and follow his exploits across North Wales and beyond on twitter at https://twitter.com/JeffPrice1j @