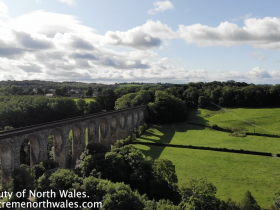 Located in Tywyn , on the West coast of North Wales there’s a beautiful  little railway line that runs for seven and a quarter miles through the stunning Fathew valley.

Originally opening in 1865 the line runs from Tywyn to Nant Gwernol. Once the slate work ceased in 1946 the future for the railway looked bleak. And when in 1950 the line’s owner Sir Henry Haydn Jones died it was widely thought the end was nigh!

Fortunately there were a select few enthusiasts who worked hard to prevent the closure. The Talyllyn Railway Preservation Society, the first such organisation in the world, took over the running of the line and although the line was in a sorry state at that time they began to make improvements which have continued to this day.

Volunteers make up the crew and station staff, track has been relaid, new locomotives have been acquired and restored along with carriages and signalling systems.

So if you are ever in this area, please go and take a look it’s a fun trip to take and enjoyable for kids and adults.

So why is Talyllyn getting a mention on www.extremenotrthwales.co.uk?

Well apart from being a beautiful part of the region’s history it is also the setting for the fantastic annual event of Race the train.

Those of you that have not heard of this event may be interested to know that each year there is a cross country, multi terrain foot race ran by all age groups and abilities against the train.

Running as far as practicable alongside the train this race, now in its 32nd year, see’s competitors come from all over the world to take part. With 4 different distances open for entry ranging from 3.5 miles up to 14 miles it has a test for everyone.

The course is very well marshalled and and signed and has water points along the way and red cross and medical cover along route.

Think you can tackle it?
Why not pay them a visit and find out more and help the continued preservation of this wonderful railway.

For more details on Race the Train visit: http://www.racethetrain.com/

Photos were sourced via Flickr under creative commons. Credit and copyright of photos remains that of the photographer Michael Warren https://www.flickr.com/photos/mikewarren/