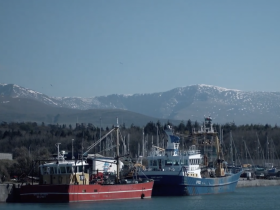 From Novice to International Sailors! Episode 6 – The Irish Sea – Sailing in a storm

North Wales is a hot bed for Kayakers from across the UK and further afield.
With it’s abundance of white water rivers, lakes and surf crested coastline there is something for every one and all abilities.

It’s also a fun family sport and relatively cheap when you think you can get a second hand kayak for £150 which will last a good few years.
I would stress though it’s important to take to the water with an experienced kayaker when you start out and listen to their safety adivce.

As a novice kayaker I’m slightly in awe at our resident Instructor and former British Army champion Sean Griffiths, who takes us out for regular paddles.
Getting a kayak to go in a straight line is task enough for me at the moment but he can make it go all ways including sideways with the flick of his wrist!

Ensure you are kitted out sufficiently with waterproofs and bouyancy aids, and if you are going to wear a spray deck ensure you are comfortable with capsizing and releasing yourself. Sean insists we can demonstrate this before allowing us to go any further. The key is to stay calm.

After jusst a couple of sessions with the maestro this is quickly becoming my favourite sport at the moment and it seems to be a great all body workout.

Kayaks were created thousands of years ago by the Inuit, formerly know as Eskimos, of the northern Arctic regions. They used driftwood and sometimes the skeleton of whale, to construct the frame of the kayak, and animal skin, particularly seal skin was used create the body. The main purpose for creating the kayak, which literally translates to “hunter’s boat” was for hunting and fishing. The kayak’s stealth capabilities, allowed for the hunter to sneak up behind animals on the shoreline, and successfully catch their prey. By the mid-1800s the kayak became increasingly popular and the Europeans became interested. German and French men began kayaking for sport. In 1931, a man named Adolf Anderle became the first person to kayak down the Salzachofen Gorge, this is where the birthplace of modern day white-water kayaking is believed to have begun. Kayak races were introduced in the Berlin Olympic Games in 1936. In 1950s fiberglass kayaks were developed and commonly used, until 1980s when polyethylene plastic kayaks came about. Kayaking progressed as a fringe sport in the U.S. until the 1970s, when it became a mainstream popular sport. Now, more than 10 white water kayaking events are featured in the Olympics.