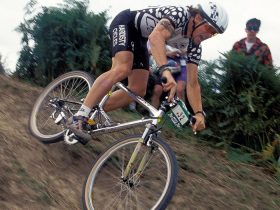 It’s Sunday in Autumn with surprisingly good weather. Not blue skies, but for Wales it was good enough for me. I’d like to say I got up at the crack of dawn, but that wasn’t the case either. It wasn’t just a case of getting the bike out (which I borrowed off my brother) and going for a ride either. I had gears to set up first. The front derailleur had other ideas however! So it was around half 12 when I left the house, and considering I wanted to get up to the Horseshoe Pass I was wondering how the ride would turn out.

I was heading up to the Ponderosa to support some of the guys I work with at Tweeks Cycles who were ‘Everesting’ the Horseshoe Pass. If you’re not familiar with the term ‘Everesting’, it is a challenge of ascending a climb enough times to have climbed the height of Everest. For the guys this meant ascending the Horseshoe Pass 32, so a 4am start and not finishing till late was the task they had in hand. I definately felt guilty waking up late knowing the guys were already riding up the Horseshoe Pass.

I had a 15 mile ride up to the Horseshoe Pass, and just over an hour passed by the time I reached the Ponderosa Cafe. Motorbikes everywhere in the Cafe carpark, it thankfully didn’t take me too long to find the guys, who were now approaching half way through their epic mission. So a short break was required, but I was soon off down the Horseshoe Pass. Now, I’ve been on my brother’s road bike a few times now. And the first time I rode it, I definitely looked like Bambi on a bike. Everything just felt wrong, but now it feels great to ride even if a little big. Growing up in a family with a big interest in Motorsport, I have a vague idea of racing lines. So going down the Horseshoe hitting the apexes of corners felt rather good. I doubt I’ll ever drive on a race track, so I’ll stick to riding on the roads instead. It’s just as fun!

Coming up to the Bridge Inn at the bottom of the Horseshoe Pass, it was time to turn around and head back up. And because I’m normally alot slower than any guys I ride with I took it steady at the back. Prior to this day, I didn’t know the Horseshoe Pass all that well and was expecting it to be alot steeper than it was. But compared to another road climb I do a fair bit, my legs didn’t start hurting as much as I’d expected them too. About half way up approaching a sharp right turn followed by a steady climb, I picked up the pace originally just to let a car pass as I was riding alongside some of the guys. Once in front I had planned to slow down but that didn’t exactly happen. I was off completing this stint on my own, which I found weird as I’m not normally stong on the climbs at all. Granted I had done alot less riding that day than the guys had, but it still felt weird! It wasn’t just that I’d pulled away, I was climbing alot faster that I normally would. Weird, just weird.

Getting to the top I grabbed something quick to eat, raisin oatmeal cookies to be exact which I’ll be sharing the recipe for soon! And off a group of us went again down to the bottom of the ascent that lay ahead. Again I stuck to the back. I really didn’t expect to have a similar ride up as I had done previously. I was expecting my legs to give up at some point. But again at the same corner I realised I had enough in me to pick up the pace and off I went!

As a result of setting off late I didn’t manage to get any more climbs in after that. Without lights and the light slowly fading, I still had 15 undulating miles to go. Slightly more descents than ascents, but still some climbs where I could do without my legs cramping up! Bar my chain coming off, I had a successful ride home. And weirdly didn’t feel as tired as I expected, despite have just completed a 40 mile ride.

A massive well done to the guys who took part in the event raising money for Macmillan Cancer Support, The National Autistic Society and Mind. Why not help them raise even more money for their chosen charities by following this link: