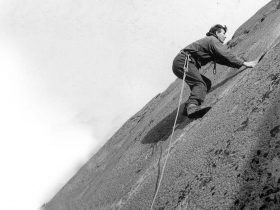 Having climbed Tryfan and Snowdon this year, I jumped at the chance to try some abseiling with local adventure company T’n’R Coaching in Llangollen.

I booked onto one of the half day climbing sessions and met up with my instructor, Paul at T’n’R’s base at The Boathouse at Chirk Marina. Joining me on the course was the Mawby family; Steve, Claire, Nat and Josh. Geocachers might recognise Josh, as he featured on the cover of June/July’s UK Cache magazine

The drive up to the hills above Llangollen gave us superb views of the Dee Valley and Castle Dinas Bran. Paul was very knowledgeable about the local area, telling me the best places to eat and drink in the town and even providing a brief history of the Castle!

We put on our hard hats, had the all important safety briefing and then started the session with some bouldering. To get us warmed up and feeling the rocks, we began by traversing a low wall. Paul taught us the basic techniques, focusing on balance and getting to grips with rock climbing, but all at a safe low level. After our first attempt it was time to go again, but this time we were encouraged not to rely upon using “jugs” which is the term for larger holds on the rock face.

I found that using the smaller crimps and pockets really worked my arms and Paul explained that the key to climbing is to use the strength in your legs and that you use your grip for balance.

We then moved over to a limestone escarpment to learn the important art of belaying, a technique used by climbers to prevent falls. The belayer generally keeps the rope locked off, so that the climber’s fall is stopped and they are left suspended, but safe. It took me a few goes to learn how to feed the rope and lock it into place correctly, but the repetition of the action meant that it soon felt second nature.

Then came the tough part! We were to take turns climbing up the cliff face, using the techniques we had practiced on the lower wall. I made a good start up and got to a reasonable height before being faced with what seemed like a smooth rock face with little or no holds. After much leg shaking from a build up of lactic acid and adrenaline, I had to admit defeat and climb back down.

After we had all taken a turn, we moved on to my favourite part of the course, the abseil. We walked up to the top of the 100ft cliff that we had just been climbing and Paul set up the equipment.

We put on our harnesses and then it was up to me to disappear over the edge first. I have a reasonable head for heights and so was able to make my way down without fear. Paul instructed me from above to take first one hand, then both off the rope, so that I could see how I was being supported. I even braved a good look down at the drop beneath me.

Reaching the bottom first provided me with an excellent opportunity to photograph the others coming down. As I watched, I was struck by just how strong the ropes are considering how thin they look. It is amazing that you are so well supported and feel so safe from just a piece of rope while you dangle from a 100ft cliff!

I really enjoyed my morning climbing and abseiling with T’n’R coaching. Paul was an excellent instructor and we all felt that we learnt a lot and left with a feeling of accomplishment. I would thoroughly recommend this course as an introduction to climbing.

T’n’R Coaching is co-owned by Tom Robinson and Richard Witheridge. Tom has been outdoors since he could walk, has a degree in outdoor education and management and has been teaching outdoor adventures for over 15 years. He has run courses all over the UK, France and Kenya. Tom has worked with all types of client groups, from talented individuals, family groups, Care groups, right up to corporate high flyers.

On top of that he is a bushcraft guru, running survival courses around the UK and has demonstrated rabbit gutting, prep and cooking live on stage at the Welsh food festival in Llangollen.

Rich has been paddling for over 31 years, coaching for over 20 years and has managed a large variety of centres.  On top of the outdoor coaching work; he has also been a manager for Bass Pubs, an IT engineer and a Systems builder in the computer trade, so when it comes to corporate team building he can relate to those environments too.

Running more UKCC BCU coach education courses a year than many other providers in the UK, he is the go to provider for cutting edge instructor training. Rich also works as a technical advisor for a variety of centres around the UK and a centre approvals inspector for Canoe Wales.